“Preaching to the Fisherfolk”

Ever since a chance arrival in 1939 of an Episcopal preacher traveling along the Intracoastal Waterway, the Episcopal Church at the end of Tar Landing Road has been a part of our local community and heritage. Local waterman with family names such as Millis, Davis, Everett, and Hobbs re interwoven into the history of St. Philips at Thomas Landing. Baptismal waters, wedding vows, lively fellowship, and loving memorials tie this community and church together. 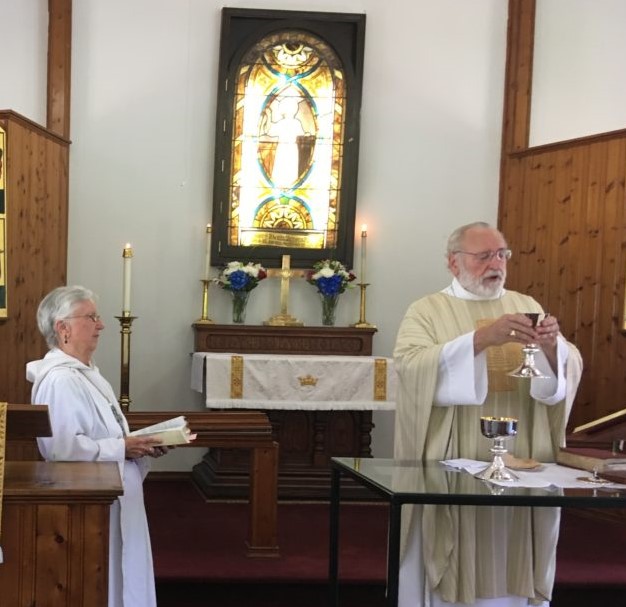 Timothy Dols has been a Supply Priest in the Diocese of East Carolina, and here, at St. Philips since 2005. Tim began his higher education at Washington & Lee University in Lexington, VA, earning his B.A. in Fine Arts in 1964. It would seem that 1964 would be a banner year for Tim; after graduating from college, just ten days prior to beginning his Seminary Studies, Tim married his lovely wife, Anne. In 1967 he graduated from Virginia Theological Seminary(Alexandria, VA) with a Master of Divinity and was ordained as Deacon, also becoming Curate (1967-1970) of St. Timothy’s Episcopal (Cantonville, MD). In June, 1968 Tim was ordained as an Episcopal priest, later becoming the Rector of Sherwood Episcopal Church (1970-1975), Cockeysville, MD. From 1975 until his retirement, Tim was the Rector of St. Peter’s Episcopal Church in Arlington, VA. In 1985, Tim received his Doctor of Ministry with an emphasis on Patristics from Wesley Theological Seminary (Washington, DC). After retiring in 2001, Tim and Anne moved to Wilmington, where they had vacationed for many years at Wrightsville Beach. Tim and Anne have two sons. Further education and experience: • Student of Irena Belakova in Icon Writing 1993 – 2001 • Archeological Dig in Vani, former Soviet Georgia 1995 • Habitat for Humanity trip to Mexico with St. James Parish, 2004 • Class in Russian Icon Writing with Iconofile in Washington DC. 2005 • Class in Gilding with Iconofile in Annandale, Virginia. 2008.

Mrs. Jean Hobbs (nee Bush) is one of St. Philip’s longest standing members, beginning her church attendance at the age of three. The daughter of one of its founders, her only absence in regular attendance was during the time of her husband Allen’s military service (USAF). Mrs. Hobbs began serving St. Philip’s as a lay minister sometime in the late 1970’s or early 1980’s. At this time, lay ministers were traveling from Jacksonville to provide their assistance and on one Sunday, the assigned lay minister didn’t attend. Her desire to serve the church was clear when she stood up, and kept the service running smoothly, leading Morning Prayer from her pew. Mrs. Hobbs has been married for 61 years and is the proud mother of four, grandmother of nine and great grandmother of four.